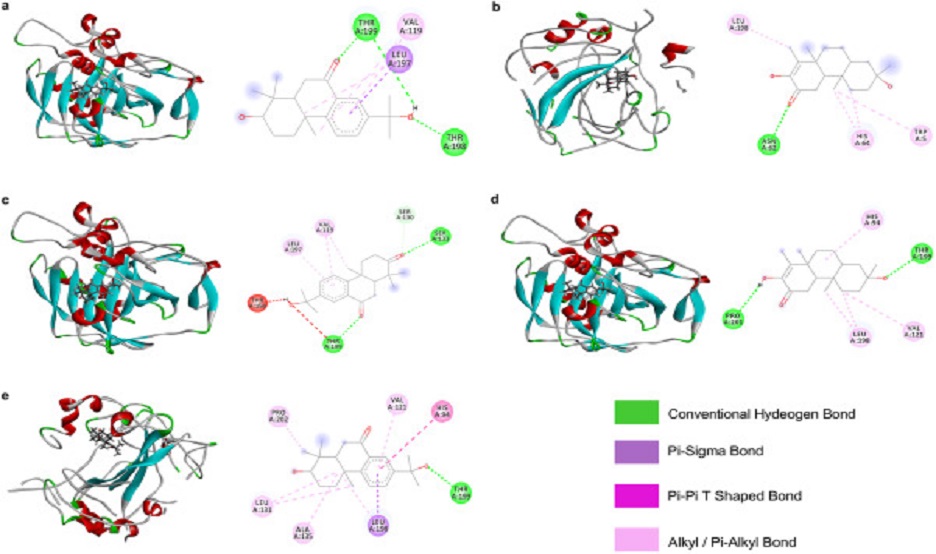 Ceriops decandra (CD) and Ceriops tagal (CT) are two traditionally used mangrove plants widely distributed along the coastal areas of South Asia, Africa, South Pacific. In this study, we evaluated the diuretic potential of aerial roots of CD, CT and assessed the effectiveness of the plants’ terpenoids enriched bioactive constituents against human carbonic anhydrase (hCA) enzyme through molecular docking. Firstly, the acute toxicity of CD and CT was evaluated in mice. In vivo diuretic activity was then studied in mice and the volume of excreted urine was measured. The urine was further examined for pH, density and Na+, K+, Cl− concentrations. From this, the saluretic, natriuretic, kaliuretic and CAI (carbonic anhydrase inhibitory) activities were calculated. Finally, total terpenoid contents (TTC) of the plant extracts were quantified and the terpenoids previously reported from both CD and CT were docked against four hCA isoforms - hCAII, hCAIV, hCAXII and hCAXIV. In the acute toxicity assessment, no sign of toxicity was found. In diuretic activity evaluation, both extracts displayed substantial increase in urine volume, with CD being at top. Concentrations of Na+, K+ and Cl− were also upsurged at a high dose of treatment (500 mg/kg). Both extracts at 500 mg/kg dose demonstrated potent saluretic, natriuretic and CAI activity. The TTC of CD was significantly higher than CT. In molecular docking analysis, greater binding affinity against hCA isoforms was demonstrated by the terpenoids reported from CD. Aerial roots of both CD and CT possess substantial diuretic activity with an inhibitory effect on CA. Here, diuretic potential as well as the total terpenoid content of CD were much greater between the two.